Top 5 National Parks to Visit in an RV 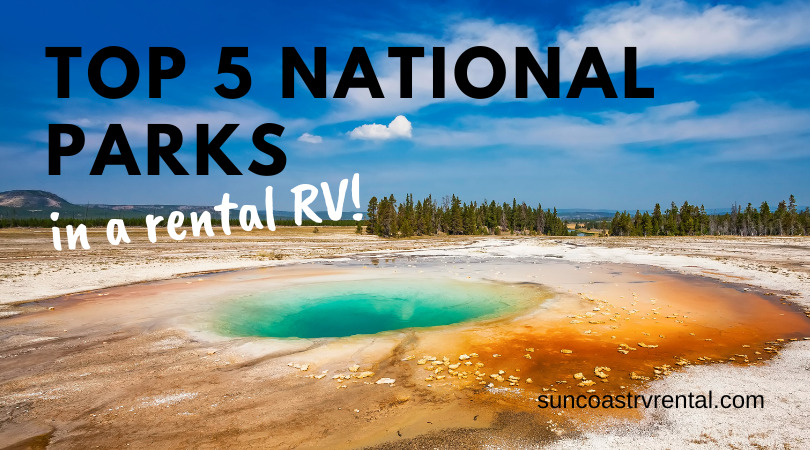 RV travel is very popular among retirees, families, and single adventurers looking for a better way to travel. RVs are small enough to fit into the parking lots of parks, yet large enough to accommodate a growing family. From weekend warrior to long-range road-tripper, the national and state parks of the USA are an amazing vacation for all. Today, we’ll tell you about our favorite national parks to visit in a rental RV.

Our Top 5 Favorite National Parks to Visit in an RV

Yellowstone Park is rich in history, science, and beauty. The park is one of the oldest parks in America and was established as the first park by President Ulysses S Grant on March 1, 1872. Yellowstone is known for hot springs, geysers, mud pits, and steam vents that make it one of the most active volcanic systems in the world. It has over 10,000 thermal features and 300 active geysers.

The park receives over three million visitors each year, and RV camping is available in many areas. In June 2015, the park introduced a new RV policy because the number of RVs visiting the park had increased. The new rules apply to both private and commercial vehicles. So make sure to read over them carefully before you plan a trip.

Badlands Park is the oldest park in South Dakota and was established on November 10, 1978, by President Richard Nixon. The park was named after the eroded buttes and bluffs that are a result of the Dakota Sandstone erosion. Visitors can see ancient fossils, preserved dinosaurs, and rock formations that were formed over 50 million years ago. Tourists will enjoy hiking through some of the most scenic landscapes in the country.

Crater Lake Park is located in southern Oregon and was established on May 22, 1902, by President Theodore Roosevelt as the sixth park in America. The park is home to Oregon’s deepest lake, Crater Lake. The lake was formed by the last geological event that blew up a volcano. In modern times, it’s considered a vital part of the World Heritage Site – Crater Lake Park. The volcanic eruption caused the creation of a caldera, which was later filled with water.

The water level fluctuates in this lake and you can see it rising and falling with the seasons. It’s also full of minerals, which gives the water blue color. You will be able to see plenty of wildlife on your journeys such as black bears, mule deer, elk, bighorn sheep, cougars, and many more. At times you might even feel like you are in the middle of an African safari because they have been spotted here too!

Grand Canyon Park is a beautiful place in Arizona that was established on February 26, 1919, by President Woodrow Wilson. It’s home to the Grand Canyon, which is one of the seven natural wonders of the world. The canyon has a length of 277 miles, which means you could easily spend at least 2 weeks exploring it. However, you will only be able to see one-fifth of it from the South Rim and one-third from the North Rim.

Grand Canyon was made famous in the 70s when President Richard Nixon visited it and created the Grand Canyon Park. The park receives more than five million visitors every year and over two million of those are RV’ers. When visiting this park in an RV, you’ll be able to stay overnight at one of the many campgrounds. Each campsite has a picnic table, fire pit, lantern pole, and water access.

Grand Teton Park is located in Wyoming and was established on March 4, 1929, by President Herbert Hoover. The park has a total area of 3,570 square miles (8,420 square kilometers). The park is home to the highest mountain range in the United States – the Teton Range and several lakes and waterways.

In 1964, the park was named after a group of 10 seven-story mountains that make up part of the Tetons. The park was created to preserve the grassy meadows, rivers, and lakes, as well as its wildlife. The Teton Range isn’t just beautiful scenery. It’s also an important part of the ecosystem because it provides food and shelter for millions of animals every year.

Visiting a national park in an RV will allow you to enjoy the beauty of nature in a more intimate setting. A rental RV is perfect for families because they provide comfort and convenience, but at the same time, they’re not too big. Each park offers a different experience, which means you won’t get bored as you travel from one location to another. However, if you don’t have enough information about the parks beforehand, then your experience will be less than ideal. You should start by planning your route and determining how much time you’ll need to visit each park and then give us a call to book your RV for the trip!

If you want to enjoy your vacation without worrying about cancelled flights and expensive hotels, renting an RV is the best solution! Suncoast RV Rental has a 5-Star Google Rating and an A+ with the Better Business Bureau. Our fleet is all new-model and very-well maintained. Check out our fleet or give us a call today, our team is standing by to help you plan your ultimate getaway adventure!